The Continued Effect of COVID-19 on Motor Exposure 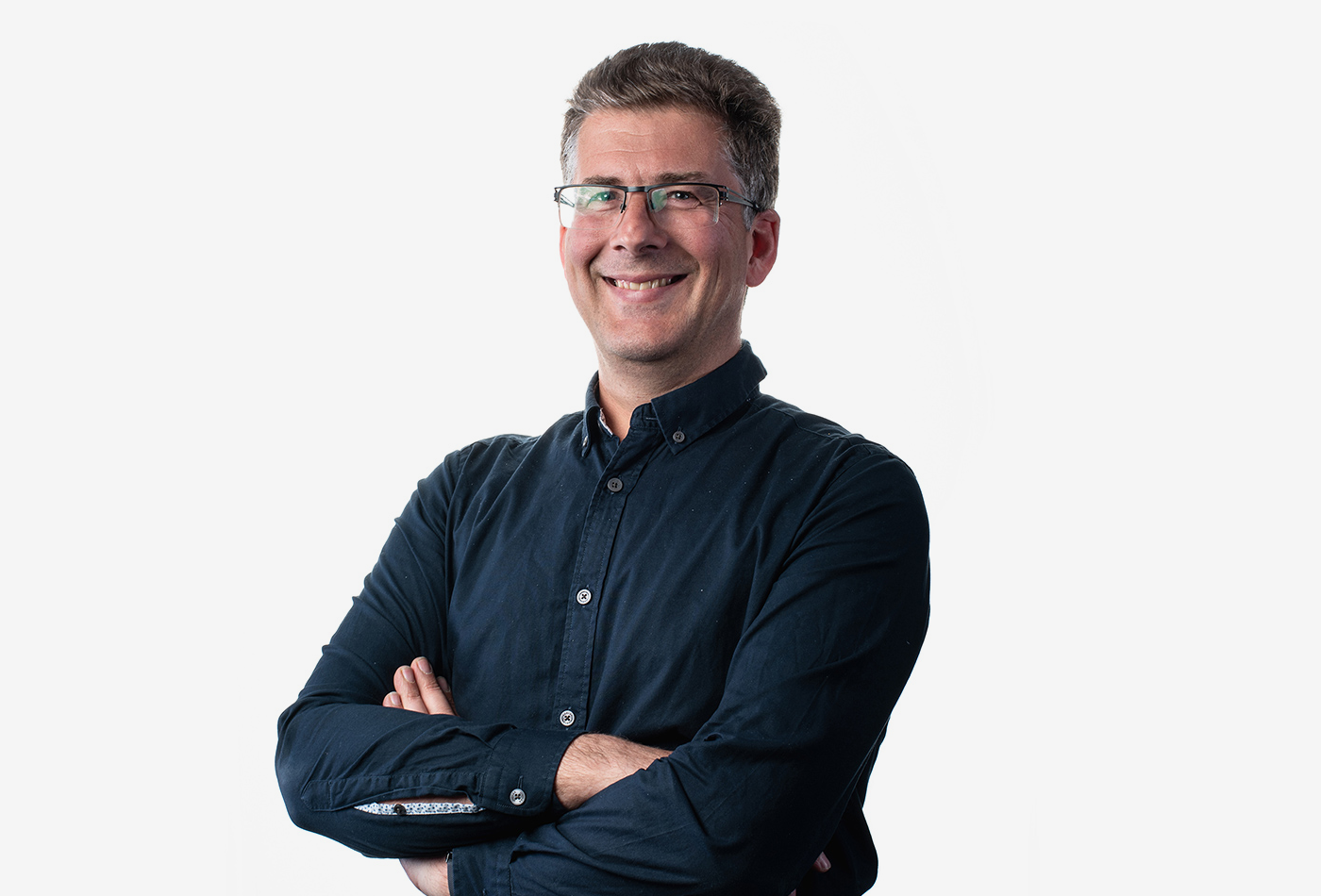 Over the last few weeks, The Floow has been monitoring the effects of the COVID-19 pandemic on mobility and motor exposure. As the lockdowns came into effect, we saw huge drop offs of journeys being recorded, such as the 90% overnight drop which occurred in South Africa, and the slower initial response from the UK which eventually led to a 30% drop in journeys on 24th March, the day the lockdown was announced.

However, despite this fall in the number of journeys taking place, overall risk levels per mile driven have likely been increasing as:

This data has been extremely useful for our insurance clients, and the market in general, and we’ve been very pleased to see our data being used and mentioned in a number of articles on this subject including:

As before, we have used summarised data from multiple clients across a number of key territories which has been aggregated to allow for a daily analysis of:

The data covers March and April, until 26th April, and has been compared against data from the last week of February to allow for normal weekly seasonality. 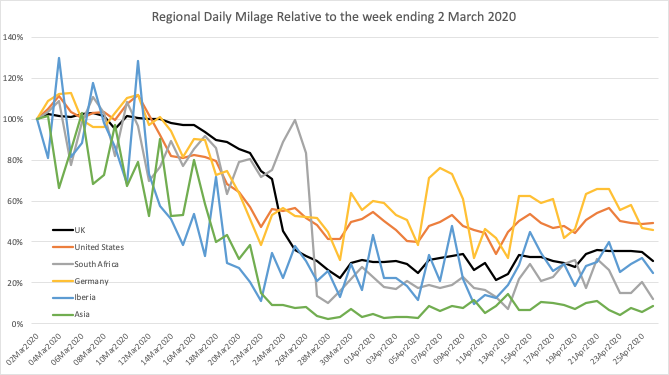 The chart above shows the significant drop in miles recorded in all regions as the COVID-19 crisis spread and lockdowns were announced. The significant drop on the day of the South African lockdown and the steep dip as the UK entered a similar phase are particularly visible.

Worryingly, in the last week or so, there has been a noticeable upward trend that can be seen for the USA and the UK.

The reduction in the number of miles driven per day could have been caused by one of three key factors: 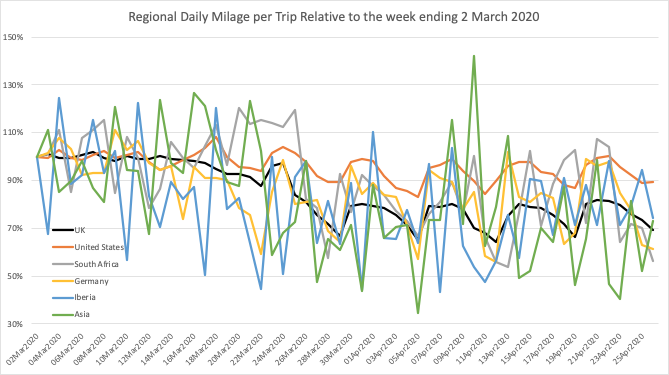 Average distance per trip can be a bit volatile but it is clear that as countries entered lockdown and limited travel to “essential” journeys, the average trip length shortened by 20-30% in most countries. Although, the USA remained resolutely at 90% of the previous distance.

2. Reduced number of trips per user 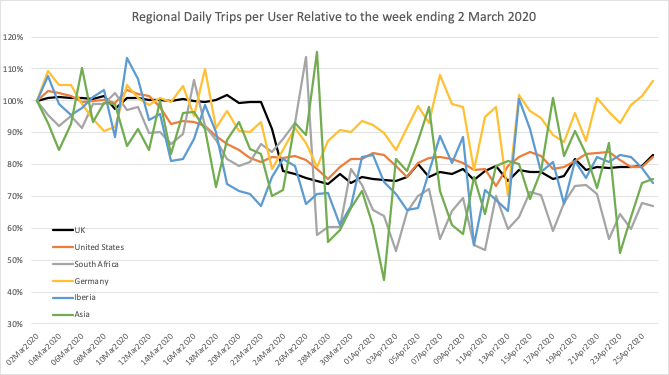 As COVID-19 took hold we saw a significant reduction in the number of trips that users were carrying out each day. The effect was most noticeable in the UK with a sudden 25% drop around 24th March but this has subsequently increased to 20%, which is in line with most other countries. South Africa has seen the biggest reduction and Germany is showing a recent significant increase bringing it back to pre-COVID levels. 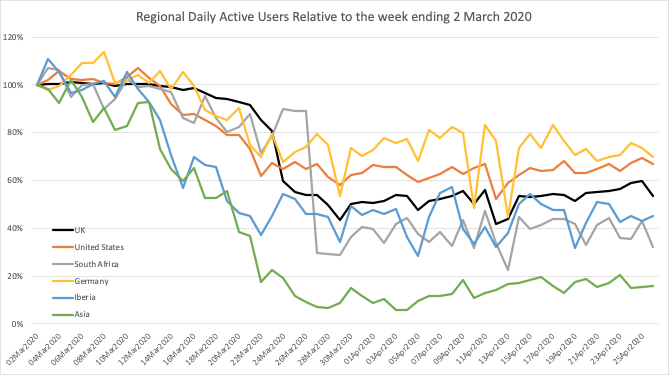 Lastly, there is the effect of the number of people who are happy to be out on the road. South Africa stands out here as on the day they entered lockdown there was a 60% overnight reduction which has so far been maintained.

Europe and the USA saw less instant reductions but in the last week or so, there has been a noticeable trend for the USA and the UK as more drivers start to take back to the road.

Likely effects on the insurance industry

The effect on the insurance industry, as discussed previously, is a combination of the reduced exposure described above along with other factors. These factors include:

Both of these elements are captured in our FloowScores and I have concentrated on the most interesting ones below:

Changes in the time of day that people drive 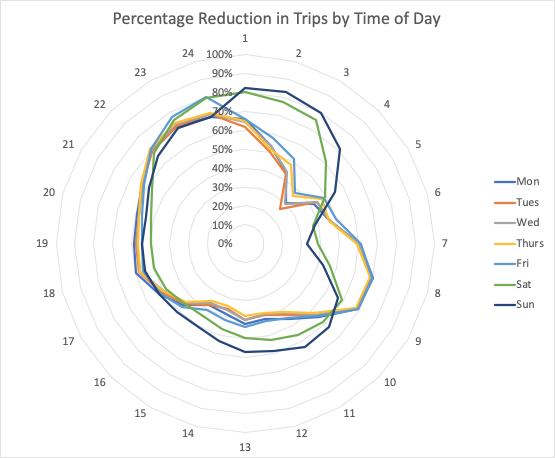 The chart above shows the relative change in the times that people are driving – aggregated across the world – by each day of the week, pre- and post-COVID. It is clear that 80-90% of the trips that were being carried out in the early hours of the morning during a weekend are now not happening, this may be because these trips were people returning home from ‘gatherings’ which have now been banned.

There has also been a 70-80% reduction in trips occurring in the weekday morning rush-hour period as well as after 6pm, as working lives continue to be disrupted. This compares to only a 40% reduction in the safer ‘middle-of-the-day’ slot. Overall, this changing environmental factor will further reduce the risk to insurers, maybe by as much as 20%. 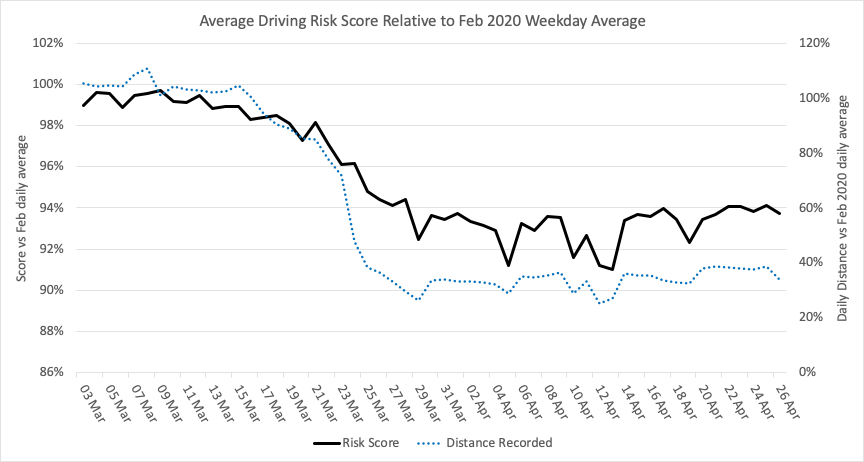 However, it is not all good news as at the same time, we are seeing:

The combination of these has more than wiped out the time-of-day improvements and led to a 6-9% reduction in the Floow Risk Score which, to some extent, will counter the reduced exposure.  In particular, increased distraction is highly likely to increase both accident frequency and claims severity.

This is something which was corroborated by a recent article by Digital Insurance which found that although miles travelled are reduced at the moment, severe and fatal crashes across the US have increased which could be as a result of increased instances of speeding.

Over recent weeks, as consumers have used their vehicles less and risk levels have reduced slightly, it is unsurprising that insurers such as Admiral in the UK, have announced they will give their motor insurance customers a £25 refund, a move which will affect more than 4.4m vehicles. However, many insurers and motor disruptors have argued that this move does not go far enough and that it could leave some motorists, particularly young drivers and those with expensive policies, out of pocket in the long run.

We’ve previously mentioned that we expect to see a rise in Pay As You Drive (PAYD) policies as consumers start to demand fairer motor insurance premiums based on their actual driving behaviour, including how often they drive their vehicle, the recent launch of our FloowTag product is one of the ways we have responded to the inevitable changes which will hit the motor insurance industry, and mobility as a whole.

We see FloowTag as a great option for PAYD propositions as it ensures only journeys from the insured vehicle are monitored and analysed so drivers are not incorrectly charged or unfairly penalised. A great first step for insurers looking to build a proposition which fulfils the changing needs of policyholders and supports their pricing analysis.

We are continuing to monitor the current situation and its effects on mobility, and we are happy to help our clients and the motor insurance industry, to navigate these sizable changes. In the meantime, we hope you keep well and stay safe.