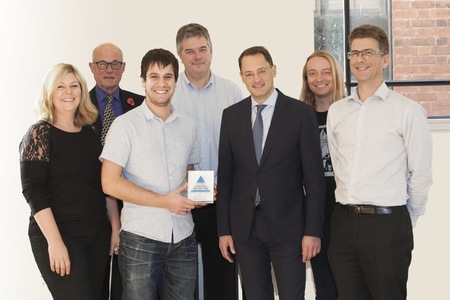 The Floow takes GPS and accelerometer data from telematics devices such as ‘black boxes’ or from a Smartphone in customers’ cars. These devices enable The Floow to monitor driving behaviours including smooth driving, acceleration, braking, and speed in comparison to other road users on the same stretch of road. The Floow analyses this data to deliver bespoke online and app-based feedback to develop the driver’s insight on areas for improving safety after every journey.

The Floow have received this award for work undertaken in collaboration with the UK’s largest insurer, Direct Line Group, and have been especially recognised for the “development and implementation of feedback to influence driver behaviour”.

The Chairman of RoadSafe, the organisation behind the PMIRSA, Tony Spalding, visited Sheffield to deliver the award to The Floow at their headquarters, where he met with the 60-strong team of expert scientists, engineers, designers and support staff who work on developing telematics solutions for a range of sectors including the insurance industry.

Presenting the award he said: “The research needed to refine the all-important algorithms behind this innovation have been crucial in ensuring that it has changed driver behaviour and made our roads safer”

On December 8th, there will be a formal award ceremony where Aldo Monteforte, CEO of The Floow, and Dan Freedman, Head of Motor Development at Direct Line, will meet Prince Michael himself, who is the Patron of the Commission for Global Road Safety.

Launched in 2014, and primarily focused at younger drivers, by the end of September 2015 over 67,000 drivers had embraced Direct Line DrivePlus telematics insurance, and are making use of the feedback platform to become better drivers. That’s up by over 75% in 2015 to date.

The leading insurance group, working in partnership with Sheffield-based The Floow, aim for the number of users to further increase in the coming months as more people see the economic, environmental and safety benefits of understanding how they drive and how their safety can be improved.

Further downloads will also mean that even more young drivers will be monitored and mentored through their early years of driving, when research suggests that they are at greater risk of a road traffic crash.

“We chose to work with The Floow because of their commitment to research evidence in the way driver behaviour is measured, monitored and used to provide feedback. The results thus far have been excellent and we look forward to continuing our journey with the Floow over the coming years”.

Aldo Monteforte, Founder and Chief Executive Officer at The Floow, said: “We are truly honoured to be receiving the Prince Michael International Road Safety Premier Award in recognition of the contribution that our organisation has made to increasing awareness of driver behaviour, and how small changes to the way in which young people drive can make significant improvements to their safety on the roads.

“The Floow’s vision is to make driving safer and cheaper for all; not only here in the UK where we work in partnership with DLG, but also all over the world where we work with leading insurers and other organisations operating in the automotive arena.”

Earlier this year The Floow also announced that it had been appointed to work alongside the European Space Agency in a pilot scheme to use telematics data to identify driver behaviour in pollution hotspots with a view to bringing down vehicle contributions to C02 emissions in built up areas.

The Floow was founded in 2012 by telematics industry veterans with the vision of making vehicles safer and cheaper for all. Senior staff of The Floow team has been deeply involved in telematics since 2000 and have actively contributed to the development of telematics products and services for over 15 years.

Moving forward The Floow plans to continue to develop its core technology and increase international scale to encourage further uptake of telematics amongst motorists for improved road safety worldwide. The Floow’s strong commitment to road safety is exemplified by the active participation in the EU road Safety Charter.

“The Floow provides feedback after every journey using behavioural change techniques via both an app and portal to encourage safer driving. This means that the driver can link the feedback to the exact component of their at-risk driving for each journey in a more targeted way”.