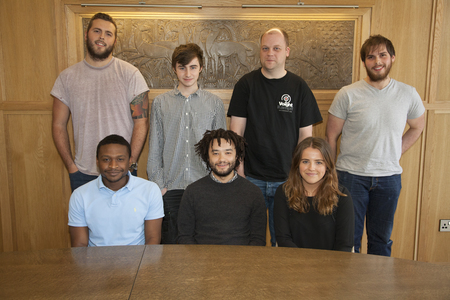 Telematics experts The Floow have expanded their work force and welcomed two apprentices as permanent members of staff following business growth and a recent investment from the Direct Line Insurance Group plc.

Developer Arran Scott spent two years working with Ruby programming at conference calls and teleconference service Meetupcall, which is based in Doncaster.

The latest appointments follow the arrival of Data Analyst Luke Willis, Java Developer Carl Ibbotson and Junior Web Developer Joshua Obaro, who all joined the organisation during the summer.

Olivia Todd and Adam Sharp have also both seen their contracts extended after completing apprenticeships with the organisation.

Adam joined The Floow through an apprenticeship with Remit Training and became a permanent Junior Web Developer in August.

Aldo Monteforte, CEO and Co-founder of The Floow, said: “We are delighted to welcome so many new faces to our team.

“We employ experts in the fields of computer science, data mining, automotive electronics and user experience design, and each of the new appointments brings a wealth of experience and understanding to these areas and their role.

“The expansion of the team will support our global reach to a host of blue chip insurance firms worldwide and allow us to continue our research into the methods of capturing and analysing data.”

This press release has been featured on:
Bdaily / Telematics.com / Insider Media